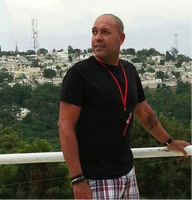 I spoke with Franklin, recently to find out his story and hear what he thinks of 50Legs. Franklin’s story started several years ago when he was still living in his native home of Jamaica. He was a married construction worker with two children at the time who loved to ride his motorcycle when it was nice out. One afternoon, Franklin got off early and he forgot his helmet in his Boss’s car but rode home anyway. On his way home a truck, going 70 MPH, came out of the line of traffic and struck him. He was badly beaten up. His head was bleeding, he had multiple contusions and he had a lot of damage to his leg. In Franklin’s words “I should have been dead…”

When Franklin got out of the hospital, his wife tried to help as best she could to get money for the family, but Franklin ultimately still had to work. He put all of his savings into finding a way to cure his leg or get a better leg to work with. He bravely went to Panama to work for a company and get a leg in Panama. Once there he was happy to have a leg so that he could work again, but the prosthesis was never customized correctly and was painful. Still, Franklin had a growing family. Now a family of four struggling to make ends-meet he continued doing any side projects he could as well as continuing construction with a painful leg. He had no choice to keep food on the table for his family. Franklin began to lose hope of ever getting a leg that fit him properly and began to think that he would never be able to work the way he used to again.

He and his wife decided to move to America and give it one last shot to find good health care and a good place for their family to settle. Franklin went through the immigration process and couldn’t work for several months due to rules within the immigration system. He didn’t have enough money or insurance to help him get the medical care he needed. One night, he was out with his friend talking about how he is in so much pain and can’t do what he used to do anymore. His friend mentioned 50Legs. “Why don’t you try 50Legs,” he said. Franklin, who had lost all hope at this point, said, “There must be a catch. No way someone would help me for free. There’s always a catch with these things.”

His friend told him there is no catch. “Let’s just fill out an application and see what happens.” Franklin’s friend told him as he pulled up the computer. Franklin applied to 50Legs and Tiffany, 50Legs’ director, got back with him right away about getting his leg. Franklin was overjoyed! He was finally going to get fitted properly and would now be able to provide for his family the way he wanted.

I asked Franklin what he thought of 50Legs after being so skeptical about the nonprofit organization. “I love 50legs. That a place like this even exists is amazing to me. It proves to me that there are still good people out there. People willing to help others. It gives me hope.”

I told Franklin that’s a profound statement and asked him why he was so skeptical in the first place. He told me “It’s hard to trust people. Especially after dealing with so many people that just want money or want something in return. It makes you wary of people. I had a hard time trusting people for many years.” I told Franklin that’s very understandable and asked him what he felt when Tiffany contacted him about his application. Franklin replied, “I feel like I have a chance. God gave me a second chance to try and do something. Do something great with my life.” Ultimately Franklin received the best gift of all from 50Legs: Hope. The leg was a nice touch, but hope was the greatest gift.

Franklin has hope that he will be able to start working the way he wants to again and be able to provide for his family and others who need help. Currently, at 42-years-young he does light construction, mechanics, jewelry making, and builds furniture. The well-rounded Franklin is now able to play with his kids better, provide for his family better and do all of the outdoor activities he has been missing out on. His entire life changed for the better and he is proud to say that 50LEGS is a huge part of that.