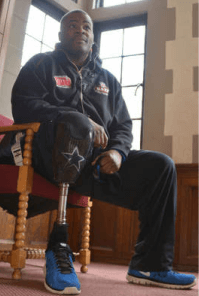 Turning 50 is a milestone. But to be given back the ability to run or jog as a surprise birthday gift — whose daughter China contacted 50 LEGS for a new leg prosthetic for her father’s birthday, Jan. 24.
Panion had to have the area under his right knee removed due to complications from diabetes in 2012. Now down about 50 pounds since his 2004 diabetes diagnosis and declared diabetes-free, the Chicago resident is able to move about with his donated prosthetic as an Evanston McGaw YMCA youth basketball referee. He and his family of four traveled to Walt Disney World earlier this March with help from POA of Florida, where Panion received the surprise prosthetic. In addition to China, 30, Panion has two other children — Leonard, 22, and Tyra, 13, and two grandchildren. He is an Evanston youth baseball umpire and has started his second season as football offensive coordinator at Chicago Public Schools Tilden Career Community Academy High School.