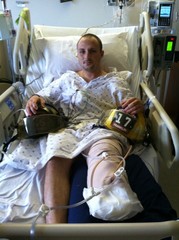 Matthew Hicks was involved in a serious motorcycle accident the afternoon of September 28th, 2013. He was out enjoying a beautiful afternoon when he was struck by a motor vehicle that turned in front of him. He was airlifted by AirCare to UC with a severe leg injury. He sustained multiple traumatic injuries to his left leg, multiple open compound fractures of the lower leg and femur fractured in 4 places. The surgeons at UC worked close to 5 hours to save the leg but unfortunately, Matt had to undergo a below knee amputation has a long road ahead of him. As his Mom I will never forget his words the few moments I got to spend with him before he went into surgery, he said, “Mom I didn’t do anything wrong, my dream and life as a firefighter is gone”. Matt’s passion in life is his work as a fire fighter. Matt’s commitment to himself, his fellow fire fighters and the community is to return to full duty as a fire fighter. Despite Matt’s devastating injury, in keeping with the phenomenal person he is, Matt has adopted the attitude that he will take his experience and be an inspiration to others. His positive attitude through out this ordeal has touched so many hearts already and so much more to come. Not only is he a miracle but he is my world, my rock, my hero. Matt has always had a desire since he was a little boy to help people and wanted to become a firefighter. He joined the Glendale fire dept as a volunteer 3 years ago and Franklin fire department as a part time paid firefighter a year ago. He has always aspired to become a full-time FF and a paramedic with Cincinnati Fire Dept and days after he lost his leg and under heavy pain meds he still kept that goal alive and said he “will become a full-time firefighter/fire medic still”. As his Mom, it has been my goal to see my son achieve his dream at becoming just that. In order for Matt to return to his full capacity as a firefighter, he needs a 2nd specially designed prosthetic leg that will remain at the firehouse with his fire-boot permanently attached. Insurance is not willing to pay for this.

Matt has made a remarkable recovery and through all the obstacles thrown his way, he continues to drive forward and not look back. So after he was fitted with a standard prosthetic leg he not only surprised me but surprised the therapist at getting up and walking around on his own! Shortly after this he enrolled into UC’s paramedic program and was accepted. Matt has been in the program now and is finishing up his first semester and hopefully going into his second. I might add that during his first semester Matt had a setback when all of the plates; rods and screws that are in his femur began to show rejection. Matt during his first semester of classes had a pic line placed and has undergone home I.V. antibiotics administered by himself around the clock to heal his femur in his residual leg. He endured a short hell with the pain and trying to not self-medicate for the pain because he knew it could interfere with his classes.

So why I’m sure you’re asking yourself why am I pleading with you? Matt had a bright future at becoming a firefighter/Medic someday and this was almost taken away from him. He started his future in Franklin with a career and now he’s a little behind at achieving his goal. Matt has no money. The man that struck him has no income either and only enough insurance to cover some of Matt’s medical expenses. So he basically has to start all over with his future. He needs the 2nd prosthetic leg to help him achieve this.

Matt begins his second semester with UC’s paramedic program but he doesn’t have the funds to cover it at this time. No one can really comprehend the magnitude of Matt’s injuries through this website. So I’m reaching out to people like you that might be willing to offer some compassion and help this ambitious young man and be a part of his future drive to continue to be a firefighter and become a paramedic.

In closing, I love this young man! He’s a talented fire fighter and as I have said before he has the “gift” and it would be a shame if we can’t work around this financial obstacle. Any other person would simply walk away from the fact they lost a leg and couldn’t return to duties as a firefighter. But with today’s technology, he can and will do just that with the generous help of family, friends, and others.