Ireland Nugent, a 2-year-old from Palm Harbor, was accidentally backed over her in the family’s driveway. After screams and disbelief, 911 calls and panicked help from neighbors, she was flown by helicopter to Tampa General Hospital, one hand sliced open, both of her legs severed at mid-calf. Seven surgeries followed in three weeks. Doctors mended the stumps of the girl’s legs below the knee joint. There were three skin grafts for Ireland and countless late-night bouts of guilt and fear for her parents.

The night Ireland lost her legs I remember feeling lost. I knew she was going to hate us. I didn’t know what what she would become? Could she dance? Could she run? Would she be happy? My husband had been riding the lawn mower that had taken our babies legs and he was beside himself. I didn’t know if he would he would would ever recover. I was going to personally have the task of not only leading my two and half year old daughter into a completely new life, but trying to pull my husband back down to Earth. 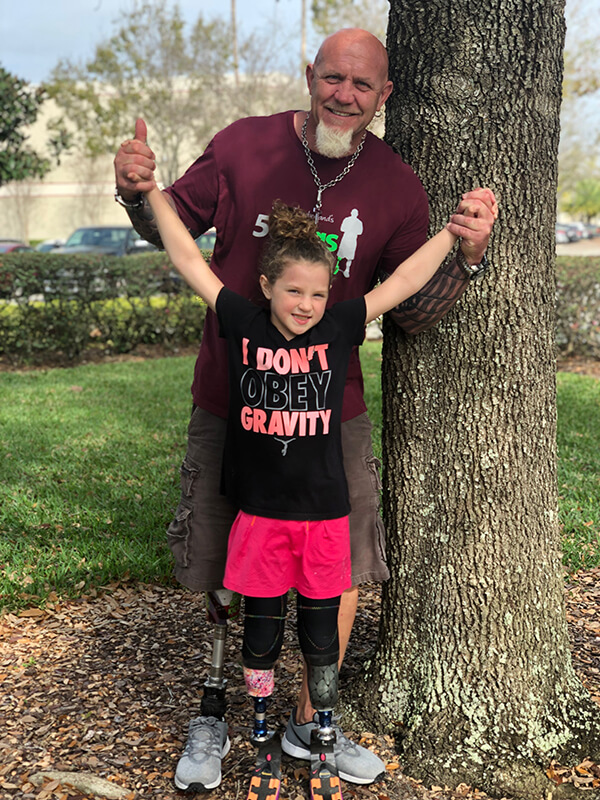 Steve Chamberland walked into her intensive care room before she even woke from her medically induced coma. How can you not like Steve? With his larger than life attitude the first time he told my husband she would be alright my husband’s color returned. Steve guaranteed me she would run, she would dance, she would everything in life she wanted to. If Steve could still ride a motorcycle , how could I argue. Steve never left us for the three and a half weeks in the hospital. When Ireland woke Uncle Steve was there, he has always been there. Every up, every down , every surgery, every infection, every cheer meet, every dance recital, Steve is there. We have never gotten a bill, we have never had to ask, Ireland has always gotten the best. Without 50 legs I could not imagine where we would be. I could not imagine how we would have gotten through those first there weeks. Uncle Steve is her Uncle Steve . Since Ireland doesn’t remember anything before the accident and he was there when she woke up, she doesn’t know that he’s not blood. He’s just her Uncle Steve, Anytime there is an an exciting event in her life, she wants him there. I don’t know how we could have provided her with the top notch prosthesis she has received.

When Ireland was five lightning struck twice. While at an amputee event I got an infection in my foot. It led to recurrent osteomyelitis. Eventually, I had to have my right leg amputated below the knee. I didn’t even have to ask. Steve and 50 legs was there. I have gotten the best care and prostheses possible. My insurance doesn’t cover any accessories. Without sleeves or anything else I obviously couldn’t walk, if 50 Legs wasn’t there I couldn’t walk. Anytime I e-mail Tiffany for anything it’s not even a question she helps me immediately. I have six children (including Ireland ) . All I have ever wanted to be is a mom. My youngest boys are four year old twins.. Without 50 legs, I would still be stuck in my wheelchair, and these kids don’t wait for me to wheel around. I live at the beach. Wheel at the beach is hard. 50 legs to me isn’t just just a charity, they’re my family. They always make sure Ireland and I have the best. Not only just what we need. I couldn’t imagine not being a part of this great organization. I will forever be grateful.